Founded on March 16th 2001, Quality Tech Solution Complex (QTSC) has now attracted 146 ICT companies including 6 large-sized companies with over 1,000 employees. More than 650 IT products, services and solutions have been deployed and gone to market. With great efforts and contributions, QTSC has truly become a tech hub for 21,094 people studying and working regularly.

Until now, QTSC has been the first and largest software park in Vietnam. On March 3rd, 2016, the Decision No 333/QD-TTg was issued by the Prime Minister on establishing QTSC chain model. As a breakthrough in developing the Vietnam software industry and startup community, this project has emphasized and highlighted the existing roles and brands of the two members: QTSC and Information Technology Park – Vietnam National University Ho Chi Minh City (VNU-ITP). On December 28th, 2019, the QTSC chain continued to admit the Thua Thien Hue Information Technology Center (HueCIT) as new member. On June 18, 2021, Deputy Prime Minister Vu Duc Dam signed Decision No. 966/QD-TTg on continuing to pilot the model of QTSC Chain until December 31, 2023. 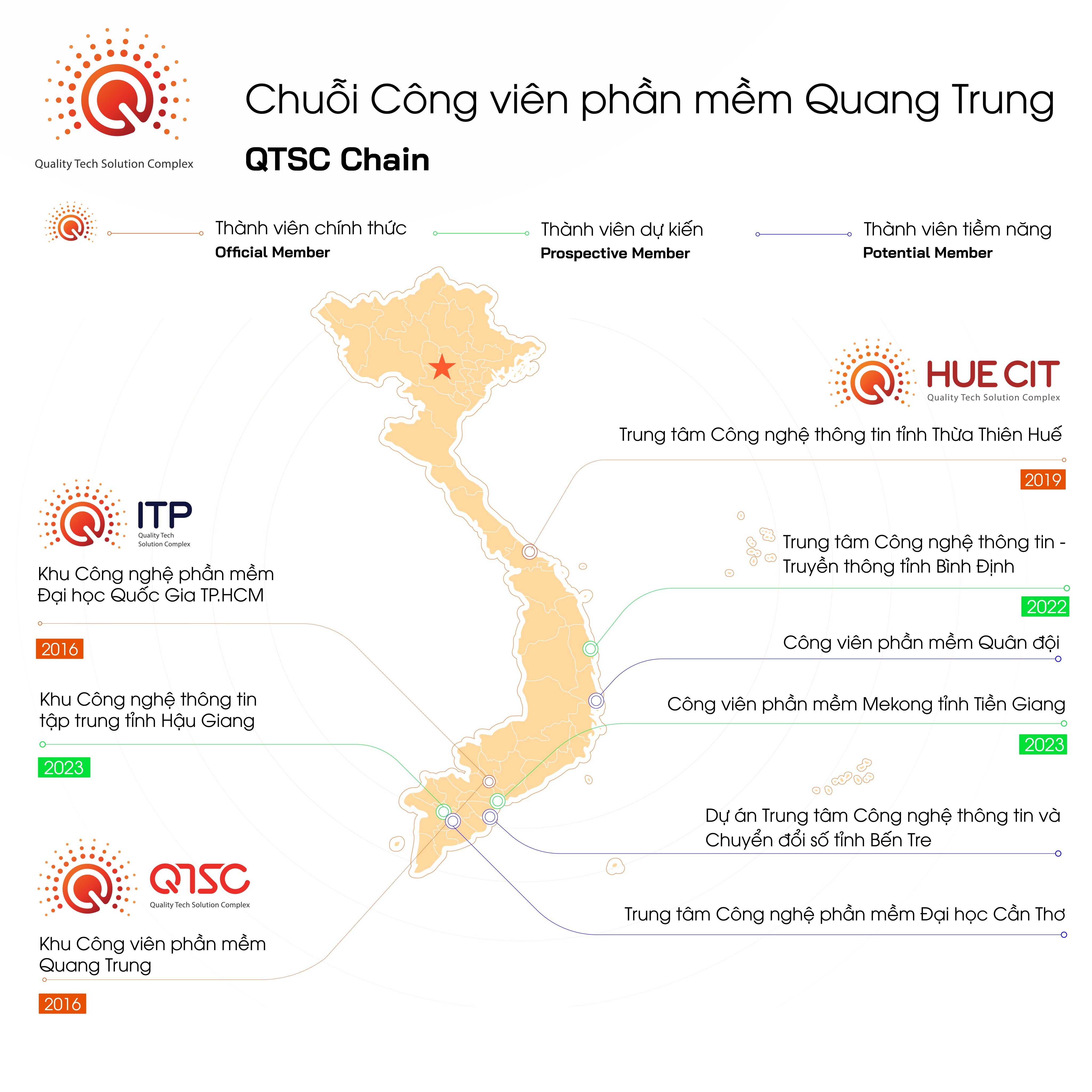 According to 2017 KPMG Vietnam’s benchmarking QTSC against other software parks in ASEAN and Asia, QTSC stood out for its investment incentives, presence of tenants from various industries, and the sustainable growth of companies located in the park. 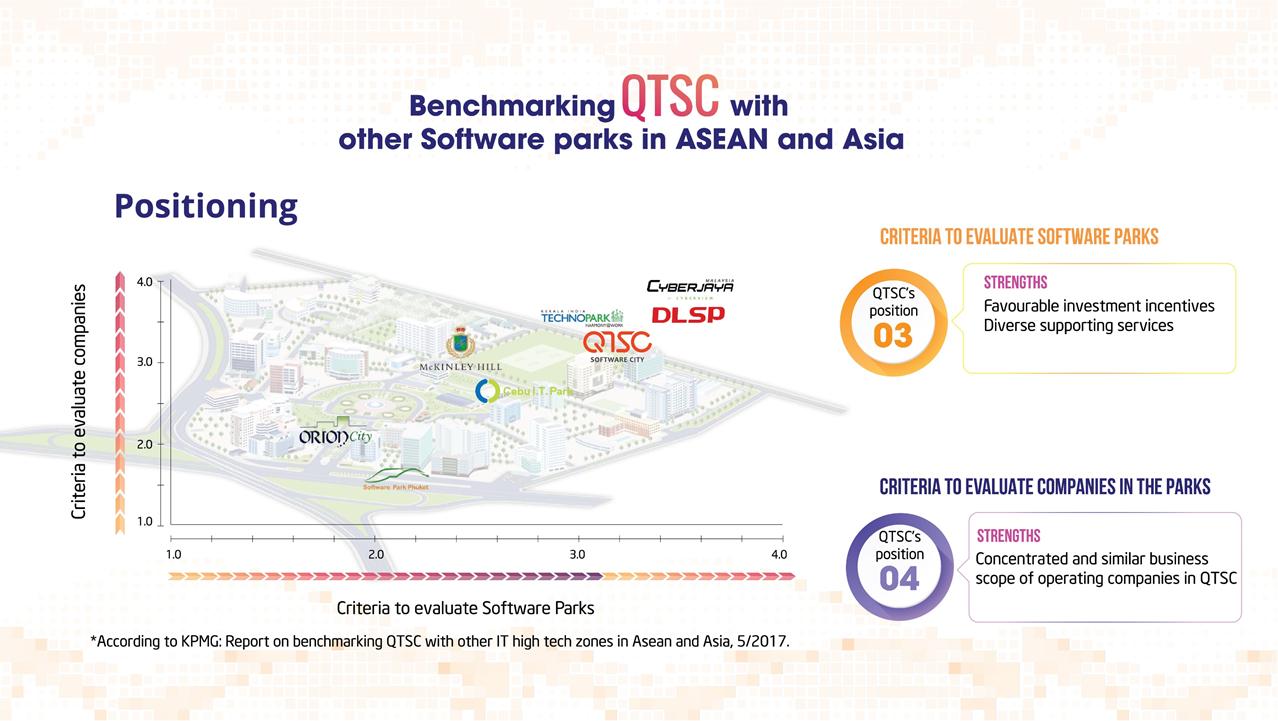 Grasping international integration trend, since 2016, QTSC leaders have been determined to upgrade QTSC into a smart city by implementing many technological applications. In 2018, QTSC has collaborated with local software companies to develop the Integrated Operation Centre (QTSC IOC), which uses Internet of Things (IoT) technologies to manage and monitor the park, improve service quality and support customers better. As the recognition of the positive achievements of QTSC IOC, in June 2019, QTSC was honored to win the second prize of Ho Chi Minh City Creative Awards. QTSC was also the first state-owned enterprise in Ho Chi Minh City to be certified as a Science and Technology Enterprise. These activities contribute to elevate QTSC to a new turning point, becoming a smarter software city. 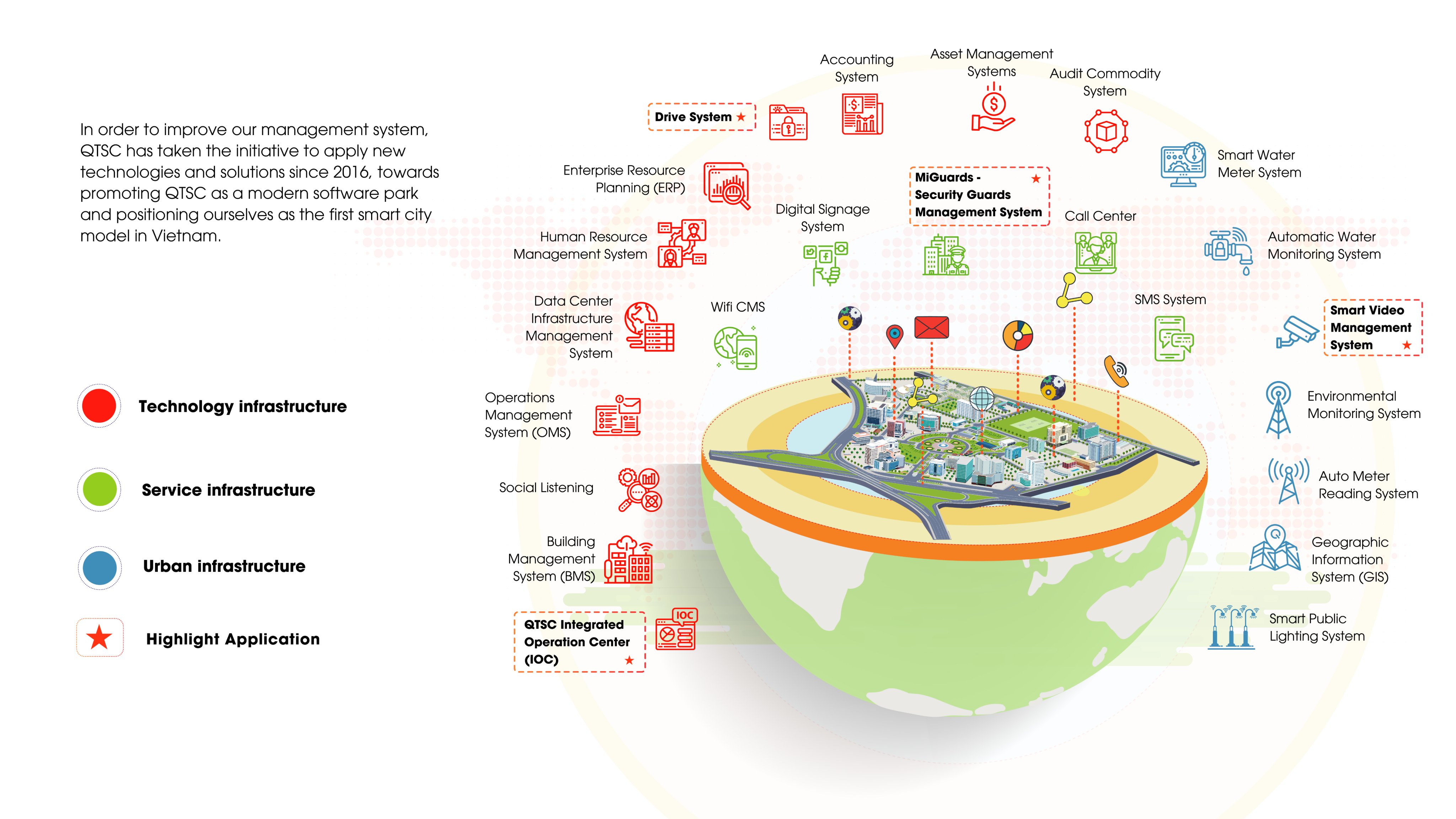 Moreover, QTSC has established QTSC R&D Labs with the goal of creating a public center for research and development, as well as supporting enterprises for developing new high tech products and solutions in the park. QTSC has also implemented the Agriculture Center of Excellence with many new agricultural models such as container gardening, hydroponic vegetable, farm-bot, etc. In the coming time, QTSC will upgrade it to a Smart village model with the aim to provide solutions and closed cycles for farmers.

In order to create an ideal environment filled with advanced equipment and devices for children to learn, experience, realize their ideas, and make their own products, STEAMZone, the largest STEAM education center in Ho Chi Minh City, was established in 2020 at QTSC. With the premises of over 2000m2 and its STEM-based models and systems, STEAMZone is able to allow more than 1.000 students to discover, as well as learn about the new and advanced technologies used in multiple fields and STEM disciplines such as Science, Mechanics, Automation, 3D printing, Virtual Reality, Big Data, AI, IoT, etc...

The application of new technologies has brought many great results for QTSC in improving operational efficiency, contributing to build a software park of technological stature, towards the model of green and smart city. This is a long process and one of the main goals of turning QTSC into a leading software city in Asia.